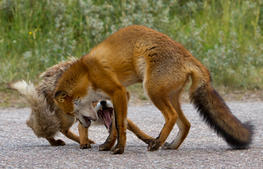 In urban areas, in particular, foxes can be a nuisance but there is some good news: they do not pose any significant health risks and, the problem of them entering your garden and causing a nuisance can soon be dealt with.

Foxes are important in the ecological balance of the countryside. They prey on other ‘pests’ that cause us many issues, such as rats and rabbits, as well as some birds. But, the rural fox does not enjoy such a good reputation, with them attacking chickens and lambs, something that many farmers find an expensive issue to deal with.

In terms of the urban fox, they have become more common in towns and cities due, in part, to urban sprawl, as well as a ready and welcome food supply in terms of bins and compost heaps.

Many people find the eerie howl of the vixen’s mating call, the female fox, in January during the dead of night an unpleasant sound. But, it will only last a week or so!

The only legal way of dealing with foxes in terms of getting rid of them are:

In terms of the urban fox, changing some of our habits can instantly deter the fox. Always making sure that the bin lid is tightly fitted to stop them getting at food is just one instant solution, for example.

Rural foxes can be dealt with by West Wales Pest Control Services, and we can also help in terms of urban foxes too – all it takes is a phone call…